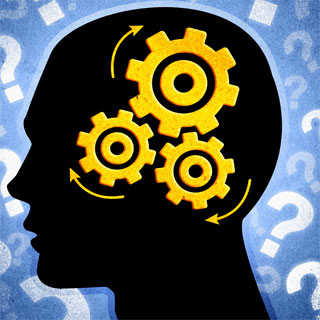 When I experience a strong, negative, or unpleasant emotion, I think of that feeling as a "red flag" that I'm thinking irrationally.  What do I mean by "irrationally?"  Irrational thoughts have two characteristics: (1) They are illogical, meaning they don't make sense, there is a relative lack of evidence to support them, and there is a relatively stronger case against them; and (2) They are maladaptive, meaning they don't help me function well in my environment--they work against me.

All human beings think both rationally and irrationally; it's part of the human condition.  We're wired that way.  And many of these thoughts happen automatically, with little or no conscious effort on our part.  We all have our own unique cognitive filters.  We tend to filter new information about things that happen our lives through a filter of past memories and experiences.  The problem is that some of these filters skew, twist, and warp the picture to keep us feeling, thinking, and acting in unhealthy ways.

In today's post, I'm going to outline six different cognitive distortions that hinder us.  Cognitive distortions are irrational thought processes, or as some people define them, thinking errors.  Before you read on, understand that we all use these distortions.  In fact, we use them on a daily basis, even if we are relatively unaware that they're humming around in the background.  So I invite you to suspend judgment about yourself, give yourself permission to be human, and identify which of these distortions you think you tend to use the most.

1) All-or-None Thinking (a.k.a. Dichotomous Thinking, Polarized Thinking): You look at things in absolute, black and white categories, ignoring other possibilities that might lie on a spectrum somewhere in between or outside of the two categories.  (Examples: “You’re either for me or against me,” excluding other possibilities such as being neutral or having mixed thoughts or feelings for or against; or “You’re either part of the problem, or part of the solution,” excluding the possibility that someone could in some ways contribute to a problem and in other ways contribute to a solution.)

2) Jumping to Conclusions: You draw a conclusion somewhat prematurely based on very limited information.  Can include:


3) Magnifying or Minimizing: You magnify one aspect of a situation and/or minimize other aspects.  This can include:


4) Personalizing or Blaming: You believe others are behaving, thinking, acting or feeling a certain way because of you, without considering other more plausible explanations for their behavior (Personalization).  Conversely, you may blame others for your thoughts, feelings, or behaviors while overlooking ways that your own attitudes and behavior might contribute to a problem (Blaming).  (Examples: “What did I ever do to him to make him look at me that way?” “You’re making me so mad!”)

5) Imperatives (a.k.a. Shoulding/Shoulds, Must Statements, Absolutes, Dogmatic Demands): You have a list of solid, absolute, rigid, inflexible, unreasonable, or ironclad rules and assumptions about how you or others should think, feel, or act.  This distortion often contributes to perfectionism or a strong need for control.  (Example: “I have to get this right” or “You need to stop doing that.”)  Imperatives can be converted into healthier thoughts called Personal Preferences, such as “I’d like/prefer to…,” “I believe that…;” “I think…” or “I want you to …”).

6) Emotional Reasoning: You think something must be true because you “feel” (actually believe) it strongly, ignoring or discounting evidence to the contrary.  In some, it is experienced in relation to deeply held core beliefs that may connect to early developmental experiences that evoke strong emotion.  (Example: I make good grades, have won several academic honors, and score high on standardized tests, but I still feel like I’m stupid; like I’m just not good enough.)

So what do we do about cognitive distortions?  Well, you have plenty of options.  You can identify them, explore them, study them, test them, accept them, ignore them, act on them, challenge them, feed them, struggle with them, challenge them, or revise them.  The approach I favor involves the following process:
In my next post, I'll walk you through this three-step process.

List of Cognitive Distortions adapted from (1) Cognitive Therapy: Basics and Beyond by Dr. Judith Beck, (2) Feeling Good: The New Mood Therapy by Dr. David Burns, and (3) A Guide to Rational Living by Dr. Albert Ellis
Posted by Aaron Norton, LMHC, LMFT at 10:20 AM